{explore} simplifies Exploratory Data Analysis (EDA) … now you can use {explore} with count-data too! Let’s take a look at the Titanic dataset!

Data are stored in tables most of the time. This data is called tidy if:

We see that the first 10 observations are similar except the id. So the basic idea of having count-data is, to group all similar observations and add a count variable. Let’s use the Titanic dataset that comes with Base R:

Now we have a table with just 32 rows instead of 2201 without any lost of information!

So, what is the benefit of using count-data instead of tidy-data? Using count data will save a lot of memory and disk space and you will explore the data much faster!

For the Titanic-data it may not make much a difference, as the data is small anyway. But if you think of a dataset with millions of observations but low number of variables or low variation in the data, using count data will save a lot of memory and disk space and you will explore the data much faster! Generating count-data from tidy data is something that a classic datawarehouse or any relational database can do very fast and efficient.

We can use {explore} to take a closer look to the data:

Thera are 5 variables in the data, the variable n is representing the number of the observations. To take a look at the size of the “uncounted” data, we can simply:

We can visually explore a variable of the count-data simply using the explore function: 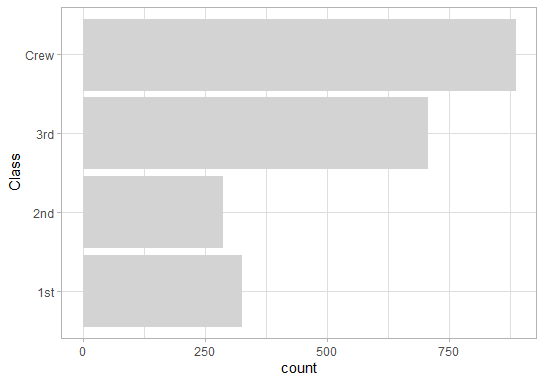 So about 40% of all people on the Titanic were Crew-Members!

We can visually explore the relationship between a variable and a target: 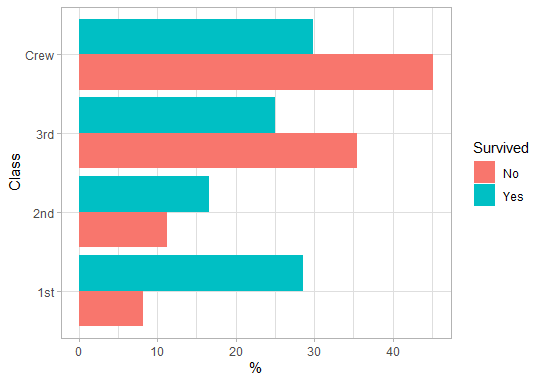 Bars of the same color sum up to 100%. If there is a large difference in bar-length between colors, there is an interesting pattern. So Crew Members had a much lower chance to survive than Passengers in 1st class.

We can even explore all variables in one line of code:

And the relationship of all variables with a target: 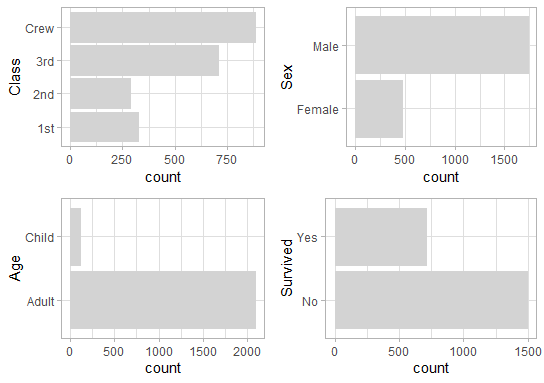 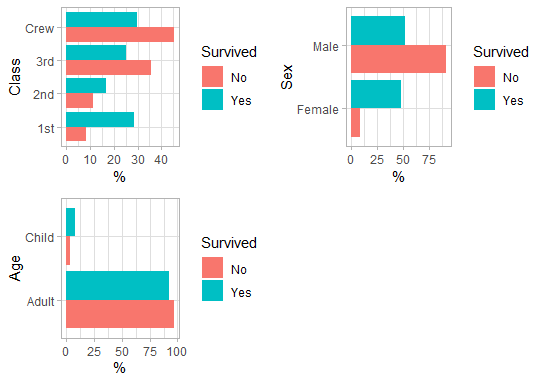 We can generate a rich HTML-report with just one line of code:

To get a reoprt of the relationship between all variables and the target: 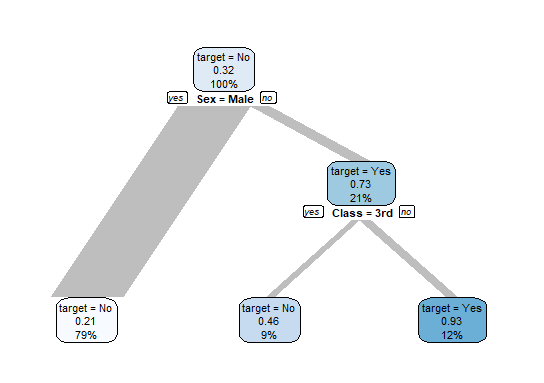 So, overall 32% of the people survived. This is shown in the top-node. “target = No” means that the majority (50% or more) of passengers did not survive. 0.32 is the proportion of passengers that survived (32%) and 100% is the percentage of all passengers that are in this node.

Splitting by Gender already shows a strong pattern: only 21% of all male survived, but 73% of all female. Taking a closer look to females, we see that better classes had better chances to survive (46% of 3rd class survived, but 93% of better classes)

{explore} is on CRAN

There you find some more examples how to use it: